So, in case everyone missed it, apparently Deadmau5′ accounts have been compromised thanks to a move from Anonymous. As we know Deadmau5 is quite the social personality and internet phenomenon as well as a sensational producer and longtime critic of edm…music. (I had to, I’m sorry if your eyes hurt reading electronic dance music, music… That’s just my favorite blunder from bandwagon fans)

Let’s recap: I didn’t actually watch any of the Ultra live stream this year seeing as I watched about 98% of both weeks combined last year. The only 4 minutes I actually caught were Mau5 dropping Funnymals – and just look how much he enjoyed it! Do you ever think about that? Artists out here trying to please gazillions of people and you probably don’t spend one second thinking about what the set is like from their perspective. From what I know, if I were him, that would have been one of the best moments of my life. I respect, I applaud. First, he tweeted before his performance, leading us to believe he has something up his sleeve.

throwing some random bullshit together for the set… holy shit I’m such a dick, this is gunna be awesome.

yung mcgarrix had a farm…

LOLOLOL. What I can’t get over is how good it sounds. Only Deadmau5. Apparently, a bunch of teenyboppers got mad and tried to start a petition to ban him from playing US festivals because he plays music sarcastically, or some bullshit. I didn’t know inanimate objects were capable of being played that way, but we’re dealing with sad emo teens here. My favorite part about this entire ban petition? Neither of the artists he trolled are even FROM HERE!!! They can’t sit with us. Joel has his own festival in his own city in his own country. Don’t people understand yet that he doesn’t give a fuck? This is Deadmau5 we’re talking about. Dude could not give LESS fucks, which is just another reason why I love him so much. Also – around 3:08-3:09 he definitely holds up his hand to do that whole “I’m watching you/see me see you” gesture, just an added semi-creepy detail I noticed. That video is pure glory.

yes. ban me for playing levels and animals. ban everyone else who does too, so we can be done with this commercial edm crap. thnks.

Then to the internet’s surprise last night, we saw a quick flip from the Mau5 talking about going for coffee runs in his nyan cat Purrari, to this.

ALL YOUR BASE ARE BELONG TO US #OPMAU5TRAP

Plot twist: Pretty sure the mau5 used to be a programmer, so he’s likely to be homies with all the Anon dudes. And did we all forget, TODAY IS APRIL FOOL’S DAY?  This article from the Daily Dot “Why Anonymous is crushing on electronica artist Deadmua5,” was written two years ago discussing the first time Deadmau5 wore a Guy Fawkes mask, talking about how everyone was excited. Trolls all love each other. It’s like a sub-culture of “the dude.” I highly doubt this is an actual hack. Are you really taking this seriously? Come on, bitches and bros. I could be wrong, but then there’s this.

Anonymous used to be all about the lulz/now they actually scare me, but for the most part I feel like this is probably an extremely well planned stunt between the two for the occasion. No reply from Anonymous when traditional news corps try to contact them and get no word? LUL LUL LUL.

Do you think this is a joke or for real? The downside is that if this isn’t, I’m pretty sure they won’t ever give his accounts back…

Guess he’ll just have to go tweet from @mau5mom until the end of the day, or go for a nice joyride in the Purrari. 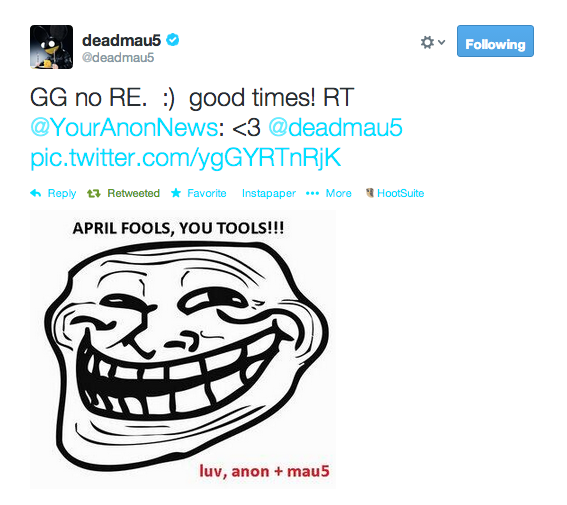 Of course I was right.